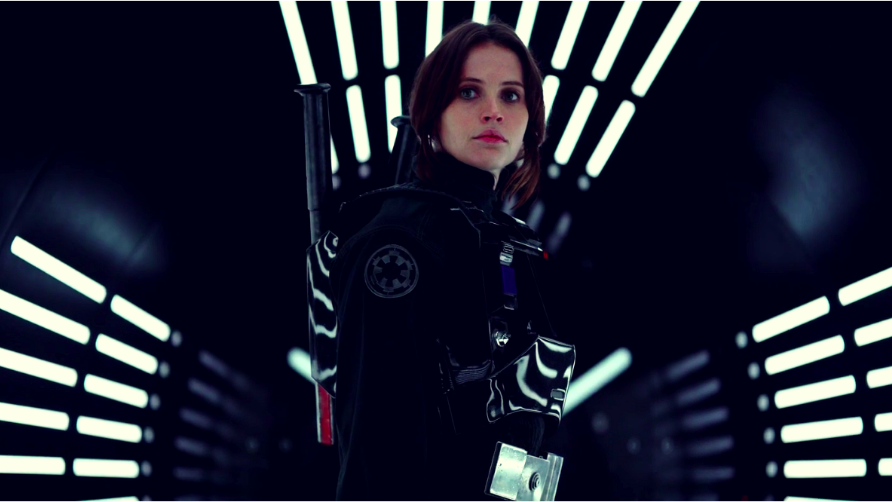 Rogue One and the Politics of Star Wars

Rogue One tells the story of how the Rebel Alliance got the plans to the first Death Star, setting up the iconic events of the original 1977 Star Wars film. In some ways, this is the best Star Wars movie since Empire Strikes Back. The story is strong and the characters compelling. In sharp contrast to the last four Star Wars movies, there are few notable plot holes. As Tyler Cowen puts it, in many ways “this is the real Star Wars movie that many of you have been waiting for.”

In a review for Vox, Todd VanderWerff points out that Rogue One is also notable as the first Star Wars movie to focus primarily on the morality and costs of war. It pulls few punches in that regard. Many characters we care about suffer and die, often in painful ways.

The awfulness of war is driven home by the fact that the heroic rebels in Rogue One are almost entirely ordinary people, with relatively ordinary abilities, rather than members of a Force-capable elite. Lead heroine Jyn Erso and her cohorts talk about how the Force is with them. But, with one marginal exception, none of them actually have the ability to use it as Rey or Luke Skywalker can. That makes their suffering — and their successes — more poignant and real.

Despite its many virtues, however, Rogue One perpetuates several problematic aspects of the portrayal of political issues in the Star Wars series. I don’t blame fans who prefer to ignore the politics and just focus on the excitement and fun. But the politics of popular culture are worth examining, if only because they often reflect real issues and may have an impact on real-world political attitudes.

What Are the Rebels Fighting For?

More than any previous Star Wars film, this one focuses on the rebels and their reasons for rising against the Empire. Jyn and several other characters are victims of the Empire’s cruelty and oppression, which give them obvious motives to oppose it. But while we see what the rebels are fighting against, we have almost no sense what they are fighting for. What kind of regime does the Rebel Alliance intend to establish if it wins? Neither this movie nor its predecessors tell us.

In Rogue One, we learn for the first time that the rebels are divided into radical and moderate factions. But it is not clear what, if anything, they disagree on, other than purely tactical issues.

It is almost as if the rebels simply assume that, if the Empire is bad, virtually any alternative government is likely to be better. Such thinking has often proven dangerous in the real world. The Russian, Chinese, Cuban, and Iranian revolutions are among the many revolts against oppressive governments that ended up installing regimes even worse than those they supplanted.

Many of the supporters of those revolutions backed them in part because they found it hard to imagine that anything could be worse than the terrible status quo. They turned out to be disastrously wrong. Even in democratic nations, voters often respond to a flawed status quo by backing “change agents,” without much consideration of whether the change they promise is actually likely to make things better.

Star Wars could have done a valuable public service by questioning this kind of thinking. But it instead appears to buy into it, or at least ignore its potential flaws. That’s a shame. Would-be revolutionaries in any galaxy would do well to consider why the regime they seek to establish would be any better than the old.

Rogue One also continues the Star Wars tradition of portraying democratic institutions in a negative light. Whenever we see the Old Republic Senate in the prequel movies and the Clone Wars TV series, it is almost always either paralyzed by gridlock or actively causing harm, as when it gives Chancellor Palpatine the emergency powers he ultimately uses to establish the Empire. The New Republic government in The Force Awakens is little better. Despite the painful previous experience of the Old Republic, it allows the forces of the Dark Side to build up a vast armada under its nose without taking any action until it is too late.

In Rogue One, the elected civilian leaders of the Rebel Alliance make terrible decisions that nearly lead to the rebellion’s demise. Such success as the rebels manage to achieve is largely due to heroic covert operatives and military commanders who disobey civilian orders.

Having written a book on the dangers of voter ignorance, I can hardly claim that democratic institutions are infallible. Star Wars’ bleak portrayal of democracy has some elements of truth. Still, history shows that institutional flaws are usually best addressed through institutional solutions, not by trusting in a few heroes or great leaders. Star Wars, like many movies and TV series, tends to prefer the latter, more simplistic approach.

That tendency is entirely understandable. It is much easier to tell an appealing story focused on heroic characters than one where well-designed institutions save the day. Star Wars would never have become a cultural icon if the Emperor were vanquished by the separation of powers or judicial review, instead of Han Solo, Luke Skywalker, and Princess Leia. But, however natural, this aspect of popular culture still risks reinforcing some of the public’s more dangerous political instincts.

Not the Prejudice You Were Looking For

Yale Law School Professor Stephen Carter offers a different political critique of Rogue One. Although the cast has been praised for its racial and gender diversity, he points out that the armed forces of the Rebel Alliance are overwhelmingly dominated by humans. If the rebels truly stand for equality against the “speciesist” Empire, “we should,” Carter writes, “have a rebellion that looks more like the galaxy.”

This criticism is not entirely fair. Although the leading characters in Rogue One are almost exclusively human, as are the Rebellion’s foot soldiers and combat pilots, there are several prominent nonhuman rebel generals, admirals, and political leaders. If humans are nonetheless overrepresented in the rebel rank and file, there could be many noninvidious explanations for that. Few armed forces are perfectly representative of the populations they serve, even in the most egalitarian and liberal democracies.

Star Wars does, however, perpetuate a kind of prejudice — just not the kind most of us are looking for. We may be sensitized to the evils of racism and sexism, but not the kind of discrimination most blatantly practiced in the Star Wars universe. Although the rebels seem to practice equality between races, genders, and intelligent biological species, they are largely oblivious to the oppression of droids.

Droids are at least as intelligent as humans, and clearly feel emotions, such as hope, fear, and pain. K-2, the main droid character in Rogue One, has personality, free will, and a mind of his own to an even greater extent than C-3PO and R2-D2. Yet neither rebels nor imperials see anything wrong with treating sentient droids as essentially the slaves of biological beings.

Much like many of the American Founding Fathers, the rebels are simultaneously freedom fighters and slave owners. Unlike George Washington and Thomas Jefferson, the rebels don’t even seem to realize that there is a contradiction between these two roles. Rogue One is a bit more sensitive to this issue than previous Star Wars films, but still shies away from squarely confronting it.

The moral blindness here is not just that of the characters in the story. It is also shared by most of the audience, and perhaps most of the producers and writers as well. Unlike the shortcomings of democracy and revolution, this problem is not yet a significant issue in the real world. But it might well become so in the not too distant future. If one day we develop robots as intelligent and sentient as K-2, will we treat them as poorly as the denizens of the Star Wars universe have?

Rogue One is a powerful and well-told story. But it’s still worth considering the subtle, but disquieting flaws in its approach to political issues. The questions they raise may not be confined to a galaxy far, far away.

Ilya Somin is a law professor at George Mason University and the author of Democracy and Political Ignorance: Why Smaller Government Is Smarter (Stanford University Press, 2nd ed. 2016). He previously discussed the politics of Star Wars here and here.

Ilya Somin is a law professor at George Mason University and the author of Democracy and Political Ignorance: Why Smaller Government Is Smarter (Stanford University Press, 2nd ed. 2016). He… read more