The Long History of Music Piracy

When you’re a historian, people expect you to write history. So, twelve years ago, when I told people I was writing a dissertation about music piracy, the typical response was, “But… that’s not history.”
I couldn’t blame them. The dirt was still fresh on Napster’s grave at the time, and challenges to online services such as Grokster, Limewire, and even YouTube were still wending their way through the courts. The days of using cassettes to make mixtapes or lurching to press the “record” button to capture songs from the radio were not far behind. If anything, a few older folks might have dim memories of shaggy-haired hippies swapping Grateful Dead bootlegs in the 1970s.
All of this seemed too fresh to be “History” in the way of Adolf Hitler and the Peloponnesian War and the like. But, in fact, piracy has a history as long as sound recording — even as long as written music itself. Jazzheads swapped copies of shellac discs in the 1930s, and shady operators even copied music in the wax cylinder era of the 1910s. Sheet music was bootlegged in the nineteenth century, just as printed materials had been since Gutenberg unleashed the printing press four hundred years earlier.

Piracy has a history as long as sound recording — even as long as written music itself.”]
Music, though, has proven more vexing to regulate than other copyrighted works. A piece of sheet music is cheaper and easier to photocopy than an entire book. And anyone can play his own version of a song in a way that another writer cannot “play” The Grapes of Wrath. American copyright law did not even cover music until 1831 — originally, only books, maps, and charts were protected.
As a matter of fact, I discovered that sound recordings were not protected in the United States until 1972. How could this be?

The Enlightenment Origins of American Copyright

Part of the reason lay in the United States Constitution itself. Our founding document is a notoriously succinct one, outlining the structure of government and spelling out a handful of basic responsibilities for federal authorities — one of which was copyright. The founders empowered Congress:

To promote the Progress of Science and useful Arts, by securing for limited Times to Authors and Inventors the exclusive Right to their respective Writings and Discoveries.”]
Children of the Enlightenment, the founders believed that the spread of knowledge contributed to the public good, and government ought to encourage it. (As Thomas Jefferson put it in 1813, “He who receives an idea from me, receives instruction himself without lessening mine; as he who lights his taper at mine, receives light without darkening me.”) Thus, government should incentivize “Authors and Inventors” to create — but rights to their works should also be “limited,” so as not to strangle the free exchange of art and ideas.
And when they said “limited,” they meant it. The first copyright term lasted a measly fourteen years, and Congress only reluctantly added new kinds of works — written music, photography, film — to the scope of copyright over the course of the nineteenth and early twentieth centuries. Seeing copyright as a monopoly, a sort of necessary evil, they were loath to expand its domain unless absolutely necessary.

The Trouble with Music… and Sound

The fate of sound recording shows how true this is. After Thomas Edison worked out the first truly effective method for inscribing and replaying sound waves in 1877, an era of freewheeling piracy ensued. By 1905, Congress was besieged by songwriters, music publishers, and “talking machine” companies with cries for help. Famous composers such as Victor Herbert and John Philip Sousa pled their case, citing the unfairness that a band of rogues profited off their works. (Of course, Sousa also slyly conceded, “I can compose better if I get a thousand dollars than I can for six hundred.”) 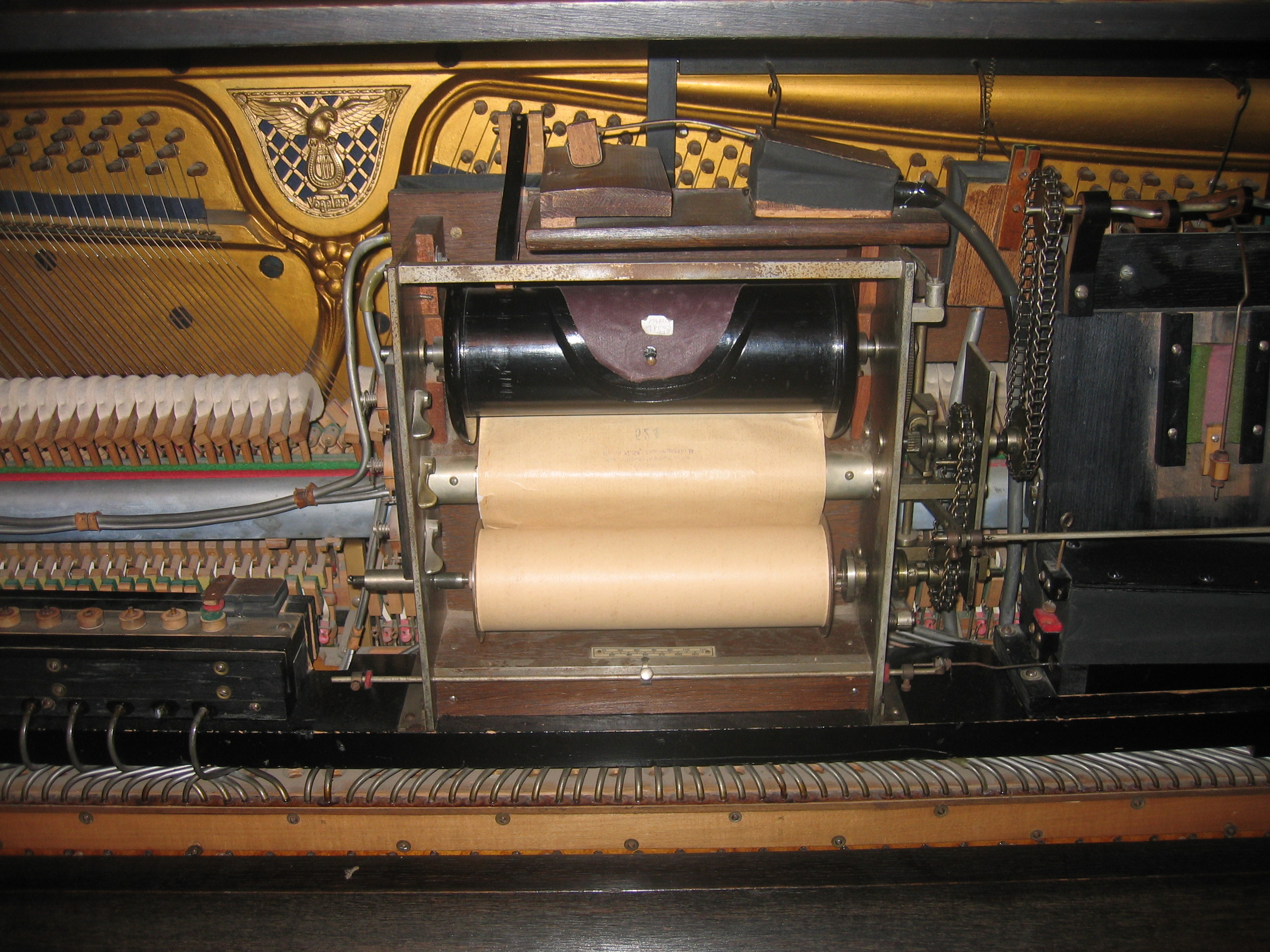 But there was a rub. How exactly would copyright reform work? The songwriters were mad because the companies making disks, wax cylinders, and player piano rolls used their music without authorization or compensation; they demanded both. The talking machine companies wanted to record performances of the written music for free. If forced to pay royalties to composers, then they wanted to have a copyright for their own recordings too.
Congressmen were perplexed. If Sousa owns the copyright for his written composition, then how could the talking machine company own a separate copyright for a recorded performance of it? Isn’t it the same music? What if two different companies recorded two different versions of the same song? Were there copyrights for each recording?
The debate may seem technical, arcane, even alien to twenty-first century ears, but the politicians contemplated the question long before there were music videos or sampling or remixes. It seems obvious to us today that Frank Sinatra and Sid Vicious’s versions of “My Way” are two distinct works. Obviously, one work — a song — can exist in an almost infinite number of unique permutations.

Muddling through in the Age of Jazz

Congress decided to punt on the issue (as it does) — and it turned out to be a good deal for songwriters, record companies, and consumers. With the Copyright Act of 1909, lawmakers set up a system that let songwriters and music publishers earn a royalty when their songs were recorded — but the rate for each “use” (each disk or piano roll manufactured and sold) was a flat one, set by the government. And artists and labels were more or less free to record versions of songs as they pleased.

With the Copyright Act of 1909, lawmakers set up a system that let songwriters and music publishers earn a royalty when their songs were recorded.”]
What Congress did not decide to do was to provide copyright for sound recordings themselves. It was just too confusing, and in the Progressive Era, anti-monopoly sentiment remained strong in American society. Copyright still looked like too much of a monopoly.
The curious result was that sound recordings seemed to lack copyright protection — and pirates noticed. For decades, bootleggers operated in the shadows of the US economy, recording live performances of operas, copying out-of-print jazz and blues records for connoisseurs, and sometimes simply making a quick buck. (The Mafia occasionally pirated pop hits, though many bootleggers were just enthusiasts of hard-to-find music.) Throughout, they could point to the law and say they were not violating it — because sound recordings weren’t protected under the Copyright Act.

For decades, bootleggers operated in the shadows of the US economy.”]
The arguments may seem flimsy, but both courts and lawmakers struggled from the 1930s to the 1960s to figure out how to square the circle. Sometimes judges ruled against bootleggers under the doctrine of “unfair competition,” arguing that the pirates freeloaded off the original label’s financial investment in producing and promoting a record. (By making a record or an artist popular, judges reasoned, the label generated “good will” with the public, which the pirate unfairly exploited.)

The Rise of Stronger, Longer Copyright

But the problem remained, since Congress was still reluctant to act on copyright reform. It took the outbreak of widespread bootlegging in the rock counterculture of the 1960s to push the issue to the front burner. Armed with cassette tapes, hippie bootleggers copied unreleased Bob Dylan recordings (“the basement tapes”) and captured Jimi Hendrix concerts for an eager youth audience.
Finally, in 1971, Congress passed a law that provided record labels with protection for their products. And in 1973, the Supreme Court ruled that states could pass their own anti-piracy laws, even though copyright had traditionally been understood as a responsibility of the federal government, and state laws potentially allowed infinite protection for recordings — arguably violating the “limited times” provision of the Constitution.
In a deindustrializing America of the 1970s, though, the cries of the record industry resonated — as did those of other “information” businesses. Makers of albums and movies and software argued that their firms needed protection more than ever in a post-industrial economy, where information was the currency of the age.
The old anti-monopoly sentiments of the Progressive Era melted like butter. Beginning in 1976, Congress embarked on a program that lengthened the term of copyright from 56 years to the life of the author plus 50 years; increased penalties for infringement; and expanded the scope of what could be copyrighted and patented (for example, software and genetically modified organisms).  Congress even arbitrarily added 20 years to the length of copyright in 1998 — a law critics dubbed the “Mickey Mouse Protection Act,” since the beloved cartoon character’s copyright was about to lapse at the time.

The Future of Piracy

Where does this story leave us today — in a post-Napster world of YouTube, SoundCloud, and BitTorrent? A fan could illegally download Prince’s entire discography within minutes of the artist’s passing in 2016, but he or she could not stream his songs on Spotify because the Purple One had the legal right to keep them off all streaming platforms.
Prince’s case illustrates the paradox: copyright is stronger and longer than it has ever been before, and yet it is arguably flouted more often than ever too. The US economy still generates a great deal of “information,” but information travels more or less freely. One could argue that the postindustrial economy thrives on the very fact that it is as easy as pressing ctrl-C to copy a word, image, or sound.
America and the world could do with a bit more of the anti-monopoly spirit of old. I do not need the incentive of a lengthy copyright term to write. (If I live another 50 years, the copyright for this article would not lapse until 2137. Is that really necessary?) And the penalties for copyright infringement do not need to be so punitive that so-called “copyright trolls” can use the law to intimidate a lowly blog out of existence with extortionate demands for using a photo without permission.
Congress once actually had it right — as hard as those words are to type. Copyright ought to be a pragmatic bargain between artists, business, and consumers that promotes creativity, not a right of vast scope, consequence, and duration that stifles it. Hopefully lawmakers will realize that less state-enforced monopoly power, rather than more, would be good for both the economy of innovation and the public interest as a whole.

Dr. Cummings is a historian of law, technology, and American political culture. His work examines how the transition to an “information society” reshaped American culture, economic policy, and the built environment from the late nineteenth to the early twenty-first century. He earned his BA in History at the University of…

Modernity is unthinkable without capitalism