On Monday, I argued that a new report by the Center for Immigration Studies (CIS) entitled “Immigrants Replace Low-Skill Natives in the Workforce” provided no evidence that immigrants are causing low-skilled natives to quit working. In fact, the trends point toward immigration pushing employed natives up the skills ladder. In his response yesterday, the author Jason Richwine either ignores my points or backtracks the claims in his original report.

1. In his paper, Mr. Richwine writes that “an increasing number of the least-skilled Americans [are] leaving the workforce” (my emphasis). I pointed out that this statement is not true, that the number of high school dropouts not working has actually declined since 1995. But in his response, he drops the “increasing,” altering his claim to say that “low-skilled Americans have been dropping out of the labor force even as low-skill immigrants have been finding plenty of work.” This altered claim is true. Some low-skilled Americans have dropped out of the labor force during this time, just not more of them, which is the implication.

He was right the first time. Even George Borjas, the restrictionist Harvard professor, separates high school dropouts from graduates when studying the effect of immigration because they perform different tasks in the economy. The result is that they have very different outcomes. Indeed, the labor force participation rate of native-born Americans in their prime is consistently 15 to 20 percentage points above that of high school dropouts. While Mr. Richwine is free to think that there is no distinction between high school dropouts and high school graduates, the labor market disagrees.

3. In his paper, Mr. Richwine was seeking to explain an interesting trend—that the overall labor force participation rate for native-born Americans has gone down for prime age workers—and argues that more native-born high school dropouts not working explains much of this trend. I pointed out that this group doesn’t explain any of the trend since there are fewer native-born dropouts not working today than in 1995, but now he argues that there is no distinction between high school dropouts and high school graduates, so combining these two, how much of the decrease in the labor force participation rate for prime age natives over the last two decades can be explained by more lower-skilled workers abandoning work? Once again, the answer is zero—or actually less than zero since the number has declined. 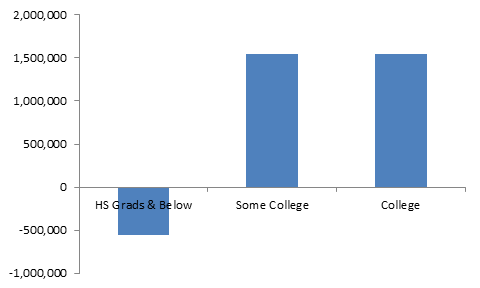 4. In his paper, Mr. Richwine claimed that low-skilled immigration was indirectly leading fewer low-skilled natives to work. I pointed out that actually all of the increase in the number of natives not working came from higher skilled categories. Now in his response to me, Mr. Richwine claims that this fact is also irrelevant because “no matter how many stories we tell about movement between categories, the picture [overall] is getting worse rather than better.” Actually, it is relevant. His entire paper was built around the supposed relationship between low-skilled immigration and low-skilled natives not working. Now he says it doesn’t matter which natives stopped working.

5. After Mr. Richwine finished backtracking, he doubled down on the worst point in his original paper, asking, “Why should we assume that natives can increase their skills in response to immigration?” First, the simple fact is that natives have upgraded their education and skills in recent years as immigrants have entered lower-skilled fields. Lower-skilled Americans have repeatedly shown that they can increase their skills. Second, as I pointed out, there is reason to believe that this relationship is causal because immigration raises the relative wage of higher-skilled workers. Incentives matter, and increasing the rewards for graduating high school or college has incentivized lower educated Americans to climb the skills ladder.

Still, Mr. Richwine argues that because “not everyone can become a skilled worker,” we should not “bring in more immigrants.” In this view, it doesn’t matter how many Americans benefit from immigration. Indeed, even if immigration helped those at the bottom much more than it hurt them by pushing them up the skills ladder, it shouldn’t be allowed unless every single high school dropout who isn’t even looking for work can—not only not be hurt—but benefit. What a strange argument.

6.  Mr. Richwine explicitly concedes that his analysis provides no evidence whatsoever that immigrants are a threat to the employment prospects of natives. But he nonetheless offers the strange theory that if there were no immigrants, policymakers would act to help those low-skilled natives. While he offers no evidence for this theory either, it does appear to be the case that government becomes more active in labor market regulation and welfare state intrusions during periods of low immigration. Former Center for Immigration Studies board member Vernon M. Briggs Jr. even wrote that one cost of immigration liberalization is that it would have prevented Congress from passing left wing worker, family, and welfare legislation.

If immigration is what is standing in the way of such legislation, then that is decidedly a good thing as well. These interventions have almost always done more harm than good. Indeed, as I showed in a recent post, a major reason for the dramatic improvement in immigrant labor market outcomes was the 1996 welfare reform that restricted their access to benefits. When government ignored them, they thrived. If the presence of immigrants encourage policymakers to do the same for natives (which they did to some extent in 1996), that is just another benefit of immigration.

This piece by David Bier first appeared at Cato at Liberty.

David J. Bier is an immigration policy analyst at the Cato Institute’s Center for Global Liberty and Prosperity. He is an expert on visa reform, border security, and interior enforcement, and his work has been cited in the Washington Post, New York Times, Wall Street Journal, USA Today, Politico, and many…