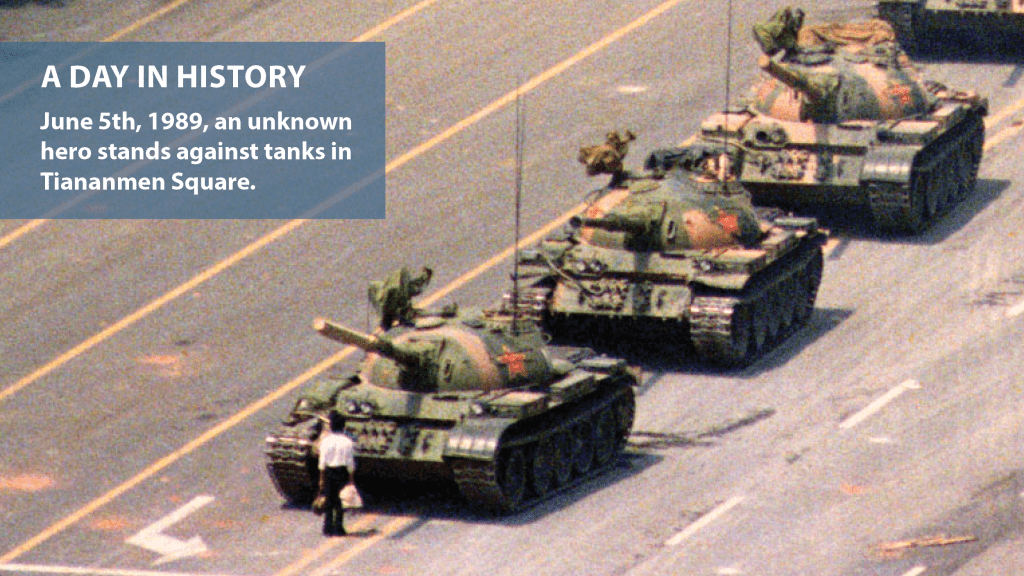 How One Image Showed the World What Heroism Really Means

The collective thought it could use military force to conquer individuality. It took unknown individual to prove otherwise.
He dared to take a stand against tyranny, corruption, coercion and suppression of speech. TIME Magazine named him one of the top revolutionaries of the 20th century, saying:

[His] moment of self-transcendence [was seen] by more people than ever laid eyes on Winston Churchill, Albert Einstein and James Joyce combined.”]
We don’t know what his real name was, so we just call him Tank Man.
Rewind to the late 1970s. The Communist Party of China was rife with corruption, taking resources from ordinary citizens to give special favors to those who were connected to the government.

Food shortages and unemployment abounded. So did discontent, but no one could voice their concerns, since the government censored speech and controlled the press.
By the spring of 1989, some young citizens had had enough, and they occupied Tiananmen Square in Beijing to demand government accountability, freedom of press, and the ability to have more control over their futures. They wanted the government to give them their lives back.
The government responded with military force on June 4, quashing the protests by killing 200 people (That’s actually a conservative estimate. The number could extend into the thousands).

Enter Tank Man.
On June 5, an unknown individual carrying some shopping bags was walking by himself (according to video footage), but seeing the protests, he decided to do something (according to speculation).
Suddenly, he walked out in front of a line of advancing tanks, forcing them to stop. And then, in a supreme act of defiance, he climbed onto the tank in front of him and pounded it with a hatchet.
He was eventually taken away—but not before journalists caught the whole thing on tape and spread his message of defiance to the world.

I assume he thinks he’s going to die. But he doesn’t care, because for whatever reason—either he’s lost a loved one or he’s just had it with the government, or whatever it is—his statement is more important than his own life.”]
We’ll probably never know who Tank Man was or what happened to him.
But 28 years later, we still remember him.