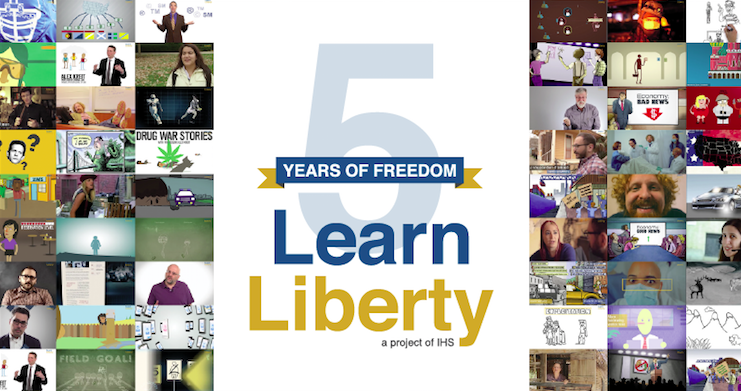 February 11th is Learn Liberty’s 5th Birthday. For the last 1,827 days we have worked to bring the ideas of free markets and a free society to life through videos, which have now reached every corner of the globe. To celebrate our anniversary, we’re sharing the top five most viewed videos in Learn Liberty history:

Over half of rape cases and over one-third of murder cases in the U.S. are never solved. That’s because the criminal justice system wastes so much time focusing on non-violent drug offenses.

5. “Why Are So Many Violent Criminals Walking Free?”

You’re at a party. The police show up. The next thing you know, they’re asking to see your cell phone. What do you do? Tell them to get a warrant.

4. Can Cops Search Your Cell Phone?

Is the so-called gender pay gap a result of women being discriminated against in the workplace? Prof. Steve Horwitz analyzes the data and finds that women make certain choices, which tend to result in lower wages than men. If you control for these choices, the gender pay gap virtually disappears.

3.Do Women Earn Less than Men?

The free market does not create conflict, but rather encourages people to cooperate with one another for mutual benefit. When people tell you that society can’t function without government, you’re right to be skeptical. Mechanisms that facilitate and are based on cooperation are all around us.

There are three reasons why mandatory minimums are really bad: 1) The sentences are ridiculously long; 2) They go after the wrong people; and 3) They don’t work.

1. War on Drugs: What You NEED To Know About Mandatory Prison Sentences

Thank you for watching our videos over the last five years. We hope you’ll be with us through the next five. Check out our full collection of videos or sign-up to get our latest videos directly to your inbox.