He earned his B.A. and M.A. in Economics from San Jose State University and a Ph.D. in Economics from George Mason University. Dr. Malek has been recognized for his teaching excellence at both the high school and college level and he placed second in the Economics Communicators Contest in Las Vegas, Nevada in 2008 sponsored by the Association of Private Enterprise Education. Dr. Malek has led several economics teacher workshops and student seminars for The Fraser Institute, and he was a featured speaker for the Gus A. Stavros Center for Economic Education at Florida State University.

The Sweet Cakes case: Let the market give discrimination its just desserts.

The Oregon-based Sweet Cakes bakery has been ordered to pay $135,000 in damages for refusing to bake a wedding cake for a lesbian couple for their ceremony. In December of 2017, the Oregon State Court of Appeals upheld the decision to force the bakery to pay the couple for damages.

Social justice advocates argue that it is “society’s” duty to eliminate pain and inequality wherever and whenever it exists. What is interesting is that I have never met Mr. Society.

The real effects of good intentions

On the first day of my economics classes, I tell my students that if they saw my paychecks that they would realize the school is exploiting me.

Do NFL players have the right to take the knee?

We need to be careful about arguing that players have a First Amendment right to protest peacefully on the field.

The invisible hand of the market reaches out to help people in a disaster, but anti-gouging laws cut it off at the wrist.

Why you’re just as greedy as a corporate CEO

It’s silly to think businesses and CEOs are evil and greedy, but ordinary customers are helpless victims.

How people really decide whether to date you: The cost-benefit analysis of love.

“The marginal benefit of dating you is now equal to the marginal cost. I don’t have perfect information, but my information is good enough. So, would you marry me?”

Why my students dump their boyfriends (and girlfriends): The 3 most eye-opening ideas in economics

Every transaction has a cost. What should you do when it doesn’t have a benefit, too?

How to make economics not boring

Wrestling with ethical issues can bring life to the economics classroom.

My 85-pound pit bull lives better than most people on this planet do. He eats superior food, drinks clean water, and sleeps inside a comfortable house on a comfortable bed.

Let’s take back the meaning of “pro-choice”

Why can’t you pay for sex?

Consensual sex is legal. But as soon as one party offers cash to another in exchange for sex and that money is voluntarily accepted, it’s considered prostitution, and that is illegal.

Not your business: Let restaurant owners make their own decisions

The free-market concept is simple — private property owners should be able to preside over whatever policies they want.

Airbnb is now facing greater opposition in New York thanks to a recent bill signed by Governor Andrew Cuomo which bans advertising of short-term rentals.

Trump’s trade policies miss one of the most fundamental economic concepts: When two parties engage in trade, they are both better off.

There’s No Such Thing as Too Much Profit

Businesses aren’t charities. They are money-making ventures that exist by and for profit. Everything else is a bonus.

Why Private Businesses Can Discriminate Against Someone Like Bina Ramesh

4 years ago Free Markets & Capitalism
A few weeks ago, park staff asked Bina Ramesh, a 22-year-old woman celebrating her birthday at Six Flags Great Adventure in Jackson, New Jersey, to change her attire because they…

Why Addressing America’s “Monopoly Problem” Would Be a Problem

4 years ago Basic Economics
Senator Elizabeth Warren recently delivered a speech in Washington entitled “America’s Monopoly Problem,” and it could completely change the way we live our lives. That’s because if she is chosen by Hillary Clinton to…

You Need to Consider the Moral Aspects of “Feeling the Bern”

4 years ago Free Markets & Capitalism
Many voters, especially younger voters, are “feeling the Bern.” But what exactly are they feeling? Generally, these individuals believe that some people (financially successful individuals) owe other people (low-income individuals)—and that…

People Hate the Top One Percent. Here’s What’s Wrong With That

4 years ago Free Markets & Capitalism
As I was walking around the waterfront in Vancouver, I noticed some beautiful yachts. I took a picture with the largest, dreaming about how nice it would be to have…

When I Look at My Donald Trump Tie Made in China, I Think About This Huge Economic Fallacy

4 years ago Free Markets & Capitalism
The presidential campaign has brought up several economic issues, and international trade has been front and center of the debate. So, as I look at my Donald Trump tie that…

Voluntary Exchange Makes Us All Better Off

5 years ago
Capitalism is frequently misrepresented on the news, on social media, and in numerous other places. These sources portray the big, evil company as the “dark side”, which is personified by…

5 years ago
What do UFC fighters and prostitutes have in common? Both deal with individual adults who choose to use their bodies how they see fit, in various ways. The former was…

5 years ago Poverty & Inequality
The government “smoking police” are at it again. The Department of Housing and Urban Development (HUD) recently proposed a rule that will force more than 3,100 housing agencies in the…

5 years ago
In order to label a country “capitalist” there must be complete freedom of association and private property. There is a limited government in place, but the government would be a… 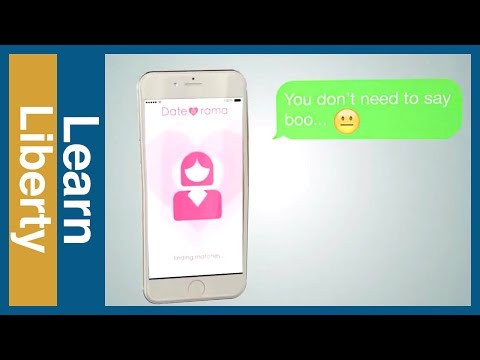 Sexonomics: What Not To Do on Tinder [Teaser]

6 years ago 03:07
Dating can be tricky. With all this new technology, how can you pick the right person from the thousands of options? How can you stand out with so much competition? Luckily,…