What to Reflect On This Independence Day

On the Fourth of July, we are celebrating 240 years of American independence. In light of that anniversary, we should take a few moments and reflect on the meaning of that day and the idea of America.

The idea of America was a consensus around the belief in individual liberty and a government by the consent of the governed. The founders, however, were influenced by different strains of thought that helped shape that consensus about their understanding of liberty and self-government.

First, the founders were men and women of the Enlightenment and believed in natural law and natural right built into the fabric of the natural order and human nature. Humans had God-given rights that could not be violated by any just earthly power. Their ideas were influenced by reading of John Locke and the British Enlightenment.

The Declaration of Independence appeals to the “Laws of Nature and of Nature’s God” and famously asserts with the universal principle that, “We hold these truths to be self-evident, that all men are created equal, that they are endowed by their Creator with certain unalienable Rights, that among these are Life, Liberty, and the pursuit of Happiness.”

Second, the founders were primarily British colonists who looked back to the traditional rights of the ancient past that informed their experience as colonists. When they appealed to their “rights as Englishmen,” they meant the individual rights and limited government of the Magna Carta (1215), the English Petition of Right (1628), the English Bill of Rights (1689), the common law, and their colonial charters. The list of grievances in the Declaration points out many violations of these rights.

Third, the founders were classically educated and read deeply in the ancient history and philosophy of Greece and Rome. Aristotle, Thucydides, Cicero, the Roman historians, and other ancients all helped the founders examine human nature, natural law, and the successes and failures of democratic and republican government in the ancient world.

Fourth, the founders’ view of human nature and government were strongly shaped by Protestant Christianity. Whatever their differing personal religious views, they believed that religion promoted virtue and morality which in turn made self-government possible. The Declaration appeals to God several times as Nature’s God, Creator (lawgiver), Supreme Judge of the world (judiciary), and divine Providence (executive).

With these varying influences, the Declaration of Independence asserted that the people formed a social compact and created a government with the purpose of protecting the individual rights of the people. “That to secure these rights, Governments are instituted among Men, deriving their just powers from the consent of the governed.”

In 1825, Thomas Jefferson reflected on the Declaration and explained that he was trying to “place before mankind the common sense of the subject.” He was merely expressing the “harmonizing sentiments of the day” derived from “conversation, in letters, printed essays, or in the elementary books of public right, as Aristotle, Cicero, Locke, Sidney, &c.” In other words, American patriots were united by certain principles of liberty and self-government.

Americans at the time of the founding largely agreed on the political principles of the new country. However, like us, they were often divided about their government. The debate over independence, the existence of many Tories who opposed the American Revolution, the debate over the Constitution, and the formation of political parties in the 1790s were just a few of their most important disputes. Nevertheless, together they forged a country in which they agreed upon liberty and self-government.

As we reflect on the meaning of America in the midst of a turbulent election and a deeply divided electorate, we should not fear civil and thoughtful disagreements among a self-governing people. Indeed, as James Madison and the other founders knew, they were endemic to human nature and republican government. Nevertheless, they also believed in the virtue of civility rooted in unity around fundamental and eternal political principles when disagreeing over policy issues.

Tony Williams is a Professional Development Instructor for the Bill of Rights Institute in Arlington, VA, and is the author of five books on the founding of America including Washington and Hamilton: The Alliance that Forged America (with Stephen F. Knott). 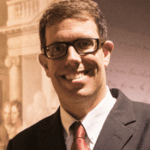 Tony Williams is a Professional Development Instructor who writes civics curricula and presents teacher programs for the Bill of Rights Institute. He earned a B.A. in history from Syracuse University… read more