On the way to my classroom, I cross a wide bike path that goes through our campus. The other day, the main path was blocked by a barrier, a large sign that read “Road Closed,” and caution tape.

I glanced past the “Road Closed” warning, and saw several cyclists. They pedaled right past the barrier in the space allowed on either side of it, without a second thought.

Someone else saw what was happening, and called after a cyclist who had just passed the barrier, “Walk your bike!” She dutifully got off and walked her bike, and everyone behind her did the same … for about ten feet! Then they hopped back on and kept pedaling.

Elinor Ostrom and other scholars of the Bloomington School showed that three things are needed for successful governance of a common resource (in this case, the bike path): organization, monitoring, and sanctioning. Organization refers to the process of defining rules, rights, and responsibilities. Monitoring refers to people watching to find out whether those rules are being followed. And sanctioning entails the enforcement of the rules.

We can see in this situation that attempts to govern the use of this path on this particular day were a complete failure, but where did it all go wrong?

Clearly, monitoring and sanctioning were not effective. There was no monitoring except on the part of a random guy that took it upon himself to point out the violation.

Sanctioning was nearly non-existent. Being called out as a rule breaker is a type of sanctioning, but because most other people in the situation either couldn’t care less or were rule breakers themselves, it was ineffective. This was confirmed by the fact that the offenders resumed riding once they were out of earshot.

Perhaps if the guy shouting “Walk your bike!” had been a uniformed police officer, the cyclists would have got off their bikes to avoid the costly sanction of a traffic ticket.

Now, what of organization? This small governance attempt failed on this margin as well. Those who tried to establish the new set of rules (“Road Closed”) failed to recognize that there was already a set of unspoken rules in play (that people can bike there). These types of informal rules are often very well established within groups, and attempts by people from outside the group to change the rules can be ineffective if they don’t mesh well with the governance system already in place.

In this case some of the rules the cyclists followed included copying the behavior of the cyclist in front of them, continuing as long as there was a way through, and using the established path. Furthermore, it was evident that social norms tolerated a disregard for the official traffic rules.

I’m not sure why the road is closed, but bike traffic is not going to cease unless violations are monitored and sanctions are enforced or until the incentives cyclists face are changed by some other factor.

An obvious change in incentives would involve actual construction work happening on the road. If that were to occur, I’m sure that more people would stop and go around that section of the road. It’s important to note though that this change in behavior would be the result of something other than the formal change in the rules.

Can you think of other examples of successful or failed governance of the commons on your campus? Do smokers hang out next to a “no smoking” sign? Does garbage accumulate on the quad? 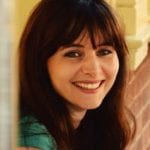