Whether you’re a paranoid libertarian who fears the coming monetary apocalypse or just a regular Joe looking to diversify your portfolio, you may have some interest in learning about Bitcoin. Like something straight out of a Neal Stephenson novel, Bitcoin has cyberpunk sex appeal. It foreshadows a radical change in the social and economic order and is shrouded with a mystique and aura that can be difficult to penetrate. But that’s why I’m here – to demystify Bitcoin for you. You’re welcome.

At the core of the Bitcoin system is the blockchain, a ledger that records the rightful owner of every balance of Bitcoin in existence. When you make a Bitcoin transaction, you effectively announce to the system that you would like to transfer a balance of Bitcoin on the ledger from one owner to another. These transactions are grouped into a block and members on the system then compete to be the first person to confirm that the transactions in the block are legitimate. Once a block is confirmed, the ledger, or blockchain, is updated to reflect the most recent transactions.

You can transfer a balance of Bitcoin from one address to another without revealing your actual identity in the physical world.

Bitcoin owners are not identified by their name or location, but by a string of characters known as a digital address. In other words, bitcoin owners are pseudonymous. You can transfer a balance of Bitcoin from one address to another without revealing your actual identity in the physical world. You only verify that you own the address from which the Bitcoin is being sent.

How do you prove ownership without revealing your identity? To accomplish that, the system relies on public key cryptography. All of that can be a bit confusing, so let’s work through a simple example. Suppose Leah wants to transfer five Bitcoin to Nick. Leah requests that the balance of Bitcoin held at her address on the ledger be reduced by five Bitcoin and that an address owned by Nick be increased by five Bitcoin. Leah doesn’t have to know Nick. She just needs to know his address. On the Bitcoin system, addresses function as public keys – everyone can see them. Leah confirms that she owns her address by generating a digital signature with her private key, which she keeps secret. Anyone else on the system can then use this digital signature to verify that she owns the address, even though they don’t know her private key. That’s the beauty of public key cryptography.

Once the transaction request is made, it’s grouped with other transactions to be processed. Once processed, the public ledger, or blockchain, now reflects that Leah’s address has five fewer Bitcoin and Nick’s address has five more Bitcoin. If Nick then would like to transfer the newly acquired Bitcoin to some other address, he’ll have to generate a new transaction request and use his private key to create a digital signature. That, in a nut shell, is how the Bitcoin system works.

In brief, the Bitcoin system is a public ledger. It denotes who owns each unit of Bitcoin available. Transactions amount to debiting one address and crediting another. And public key cryptography ensures transactions are secure.

Want to learn more about Bitcoin? Click here for an article on cryptocurrency and here for a piece on how Bitcoin payments are processed. 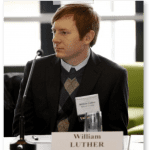 William J. Luther is an Assistant Professor of Economics at Kenyon College. He is also a Fellow with the Atlas Network and its Sound Money Project. William Luther grew up in rural Otway, OH.… read more